In 37 days I’ll be stepping back onto a plane and heading Stateside again. Well, to be truthful, I’ll be Canada bound for the first leg, but my jaunt will take me from Vancouver – Seattle – Portland – San Francisco and everywhere in between. I’m one of the lucky recipients of the Hybu Cig Cymru/Meat Promotion Wales Livestock Scholarship. I’ll be the 20th scholar since the program started in 2004, and the first to have taken a study tour to look at the pork industry. 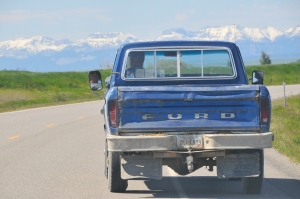 I really can’t wait. It’s a dream come true, I get to travel one of my favourite parts of the world in order to visit farmers, producers, farmers markets, retailers, butchers and restaurants. I’ve already started making plans but I’m open to any suggestions for additional places to visit on the trip. So if you’re reading this, and you know someone with a link to the pork industry in the Pacific Northwest, GET IN TOUCH!

The plan is to document the trip, so I’ll be posting on here a little more often through September and October. If you know of someone with a passing interest, please pass on the blog address. The purpose of the scholarship is to get as much of the information I’ve learnt out there to other livestock breeders, producers, sellers and the consumer. I’ll be doing a series of talks next year based on the trip back in Wales, so if that’s of interest, let me know and I’ll start compiling a mailing list ready for some info closer to the date.

I’d like this to be an interactive experience, so please spread the word!

I promised a little more action on the blog, so here’s another belated post about our growing family. A couple of weekends ago, we made our way up to Shrewsbury to see Sarah Moore of Tails of Booley. We bought three beautiful six month old Mangalitza pigs from her, all gilts, one red and two blonde’s. They were a little nervous after the long journey back, but they’re now settled in their woodland and have been rutting about, breaking through the fence, rolling in the mud and making themselves at home.

We’ve had a fair deal of interest in the pigs, a few of the local farmers, who’ve kept pigs for decades have been curious to take a first glance at a curly coated pig. I was a little wary that they’d think of them as gimmick pigs but in fairness they’ve all been quite gushing when they’ve been to visit. We’ve also had family, friends and neighbours up to say hello (including some Swedish visitors today!).

So why curly coated pigs? Well, to be fair, these are test pigs for this year before we start a new herd. The Mangalitza is a traditional lard producing pig, they’re an Austrian/Hungarian breed but at one time all of Europe would have had a similar breed. The closest modern British breed would have been the Lincolnshire Curly Coated that died out in the 1970’s. There’s been mention of a Herefordshire breed too, perhaps at one time we had a Welsh variant as well.

Unlike modern developed breeds (and I include our rare breeds in that category) they have an intense marbling in the meat – this is partly down to the pigs natural characteristics but it also develops thanks to a very specific high fibre, low protein diet over a long period of time. Modern pigs are often ready for slaughter at six months, these won’t be ready until 12 to 18 months. The characteristics of the fat in the Mangalitza is very specific too, due to the diet, it’s lower in polyunsaturated fat, higher in monounsaturated fat and has a higher level of Omega 3 to 6 fatty acids than most seed oils. This makes the meat (and the fat) perfect for long curing, as it won’t go rancid quickly. One of the authorities on the breed is founder of Wooly Pigs, Heath Putnam, check out his site for more information.

We’re hoping to send some of our backfat off for lab testing once we’ve had a first slaughter to confirm quite how good these pigs are!

We’ve named two of the pigs, but I’m offering up a packet of sausages to the best name for the third. The largest of the blonde gilts hasn’t yet been named, pictured above (photographs courtesy of L. Taylor by the way) – we’ve had some suggestions via our Facebook page, and so far my favourite is Princess Bubblegum. Feel free to drop a suggestion in the comment section, I’ll keep the competition open for the rest of August.

I’ve been very tardy in my posting these last few weeks. It’s largely due to me being extremely busy. Hopefully over the next few days there’ll be a spate of postings to bring you up to date on where I’m at.

So, where do I start? Well, Iowa is as good a place as any. I was lucky enough to secure some funding to attend the 33rd Annual Sausage and Processed Meats Course at Iowa State University. It’s a course with an incredible pedigree, from a small producers perspective Iowa State has been the training ground for a few of the US’ most illustrious producers, namely Paul Bertolli former Chef at Chez Panisse and owner of salami company Fra’Mani and Chef Chris Cosentino of Boccalone and Incanto.

The course was a great mix of people, small producers like myself, Chef’s, ingredient suppliers, machinery designers and manufacturers as well as a cross section from some of the major US meat companies such as Sara Lee and Oscar Mayer. It was a great balance of theory and practice, with us all being assigned group projects during the week. I was on bacon duty, quite an eye opener really on how they make bacon in the US and a great opportunity for me to play with liquid natural smoke for the first time. 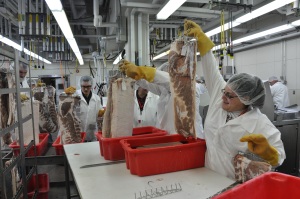 The standard of the international lecturing panel was incredible. The real stand-out for me was Klaus Kreibig, from Devro Casings in the Czech Republic – he’d flown in at the beginning of July  to prep for the course, making nearly 60 varieties of fresh, semi-dry and fermented sausages for the week’s major social event – Wurstfest.

By the end of the week I had a stack of recipes and business cards to take away with me, these weeks since there hasn’t been a day when I haven’t had an e-mail, a facebook message or a Linked In message from someone on the course. Look out for some US inspired products – I’m hoping to add frankfurters, American bacon, smoked sausages and pepperoni to the roster of products!