A post that strays somewhat from charcuterie, towards another of my obsessions: collecting art works. I’m a compulsive hoarder, and I’m terrible for buying paintings, drawings, photographs, etchings, prints and sculpture. Today marked my first ‘Meat for Art’, when a block-print was exchanged as payment for bacon and sausages.

However, this isn’t my first charcuterie related art acquisition. During my HCC Scholarship to the US last year, I’d stopped in Brookings, Oregon to call into their Farmers Market. Across the road was an antique shop, I wandered over for a browse and came across a collection of pig drawings. They were owned by Elmo Williams, an Academy Award Winning Film Editor. I can’t put my hand on his biography at the moment, but if my memory serves me correctly the story goes; that he would ask any visitor to his office to draw blindfolded the picture of a pig. The drawings would then be pinned to his office wall. At one time the drawings numbered in their hundreds. Of the drawings on sale that day, the most famous ‘artists’ were Peter Sellers and Britt Ekland. I opted for some more modestly priced ones. The first is by Jack Davis, an illustrator and cartoonist who also produced movie posters during the 1970’s for films such as Kelly’s Heroes and Inspector Clouseau.

My second purchase was a slightly more naive drawing by Helen Palmer Geisel, an American children’s book author. At the time I didn’t know who she was, however, after purchasing the drawing and doing a quick google search, it turns out she was married to Theodor Seuss Geisel, who’s better known as Dr Seuss! 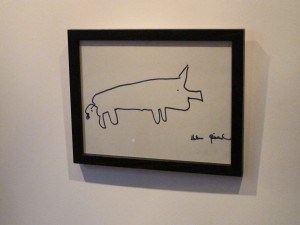 I’ve a raft of interesting customers, people who are a joy to chat with when I’m on my rounds. I hope I don’t take up too much of their time, it’s always nice to stop and talk when the only company I usually have in the day are my pigs and my DAB radio.  And so, to my newest acquisition – “Mythic Animal #3” by Rose Davies. It’s one of a collection of blockprints which draw their inspiration from some rock drawings Rose saw while on a trip to Pakistan. Rose also has a blog that’s well worth taking a look at.

I don’t know whether it’s a pig or not, but the drawing brought to mind a little snifter of interesting information that a friend in Vancouver had told me. Said friend, is a specialist in mythology, and on a visit some years ago we trooped to nearby Penymynydd (which literally translates as The Top of the Mountain) above the village of Trimsaran to the spot that is reputedly the site of the entrance to Annwfn (The Underworld) in the legends of the Mabinogion. While staying with him last October he dug out a quote for me to read:

‘Lord,’ said Gwydion, ‘I hear that some kind of creatures that have never been in this island before have arrived in the South.’

‘What are they called?’ said Math.

‘What sort of animals are they?’

‘Small animals whose flesh is better than beef. They are small, and their name varies. They are called moch now.’

‘Pryderi son of Pwyll-they were sent to him from Aawfn by Arawn, king of Annwfn.’

from The Mabinogion, a new translation by Sioned Davies.

So, by my reckoning the Welsh have a pretty firm claim to the pig.
What makes for an even better story is the legend of the Twrch Trwyth, which recounts the hunt of an ‘enchanted wild boar’. Part of the story mentions ‘Coed y Glyn’ (Woods of the Glen). Now, we can’t be sure which Coed y Glyn it refers to. I like to think that as we’re in the shadow of Annwfn and as we’re part of the Glyn Estate, with a large swathe of woods that have been known as Coed y Glyn for centuries, that there’s a distinct possibility that the woods that our pigs reside in could have been at one time home to another mythical animal!

Once again I’ve been remiss in my blog posting, a few weeks back we killed a Middle White Cross that we’d bought at the market. I’d planned on photographing everything meticulously(I did train and work as a photographer after all). But, as I’m the person in the middle of things, actually doing the work it becomes rather difficult to shoot reportage of oneself. I did however manage a few snaps last week as I was cutting some meat. They aren’t brilliant, they were taken with grease covered hands in amongst cuts. 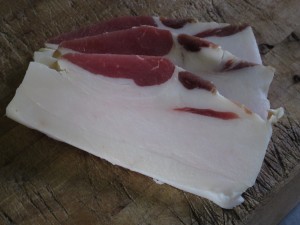 Do you like a bit of fat on your bacon?

The pig that we’d bought (which I’d called Harriett) was fat, much like what my forefathers would have slaughtered and my uncle suggested that we cut the pig how he would have done when he was younger. The first job was finding two pieces of wood, one to hold the ribs open and another like a ceremonial apple for the mouth. Rather than splitting the carcass down the centre of the back bone, we cut along the line of the back bone, cutting through the ribs and slicing a portion of the loin. As the carcass chilled the stick in the ribs helped keep the cavity open, making it easier when it came to sawing the ribs.

Once split into primals, the shoulders, legs and middles were hand salted in a slate tray and left to cure. The head was cut, brined and made into brawn, while the ‘chain’; the spinal column complete with the pieces of loin were cut as fresh meat. Liver, heart and lungs went to faggots, and were lovingly wrapped in the caul fat before being cooked. What trim remained went to sausages and bones to stock.

We usually air dry the cured shoulder, middles and hams but as it’s been an unnaturally warm winter I could see that there was a fair amount of mould growth even after a weeks hanging. Taking that into consideration I decided to thickly hand slice the middles – those who are devotees of lean meat should avert their eyes as the bellies were largely made of beautifully cured white fat. To be honest, I can remember processing pigs a few years back which were far fattier than this one. Years ago, before the introduction of ‘super-lean’ feeds and the pressure of supermarket demand for lean meat this was the standard. Though this meat was for our own consumption, it’s surprising how many folks ask for ‘proper Welsh bacon’. 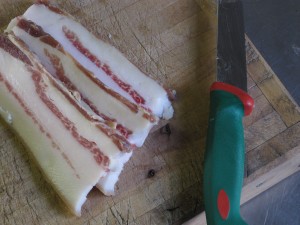