We’re moving ever closer to that dream of producing some of the UK’s best British Charcuterie. I’m biased, so I think our bacon and sausages are pretty damn awesome as they are but I’ve been chomping at the bit to get going on some of the more ‘fancy stuff’. When I started my proper research back in 2010, I thought we’d have an unit set up mid 2011. Well, how thick was I, it’s 2013 and a new unit is still not a certainty, but… we’re getting there. Time hasn’t been wasted, we’ve managed more travel than I’d expected, met more farmers, producers and got a bit more of our own production testing under our belts. If anything, we’re fitter, faster stronger and far better placed to launch on a bigger scale than had we started building a year ago.

This past week I met with the bank manager and between bank loans and money we’ve raised we’re edging towards the £80,000 mark already for secured funds. We’re through the first competitive round of the Welsh Government Processing and Marketing grant scheme, which we’ve very kindly asked for nearly £100,000. That grant is by no way secured, and I’ve been spending every spare minute these past weeks asking for letters of support, scouring trade magazines and catalogues, meeting equipment reps and totting up projected financials and writing marketing plans. As it’s a 50% grant, we’re still short of around £20,000.

We’re aiming big on the new unit. Trying to choose equipment that’ll future proof the business for a good few years to come. We won’t be fully automated, but neither will we do everything by hand – we’re taking a middle road which will mean that everything will remain artisan. We’re also trying to be cost effective, productive and sustainable – solar pv, solar hot water and from a wider whole farm perspective we’re working on a possible hydro project with a neighbouring farm.

Last year we enlisted the help of Dangerous Doug Films and we’ve got a rough cut of a film ready for a Kickstarter bid. Crowd funding doesn’t seem to be as well known as I’d initially thought – my bank manager hadn’t heard of it and quite a few people I’ve spoken to recently haven’t either. So, here’s a basic explanation… I need £20,000, so websites such as Kickstarter allow me to post a little film and some text explaining why I need the cash. Those wishing to support the business financially are called ‘backers’, they can offer as much or as little as they like. They’re not buying a part of the business, but they’re not necessarily just giving money for nothing either. There are different tiers of funding, £5 might get you a thank you card and the satisfaction to know that you’ve really contributed to the growth of a small business, £20 might get you a thank you card and a nice salami from the unit once it’s built. The tiers of funding keep on growing, and the offers get better and better. I’m working on the ‘top offer’ at the moment, I won’t say too much yet, but I’m hoping it’ll be a culinary/charcuterie based foreign trip!

In the meantime, if you’d like to support the grant application, I’d be very grateful if you signed a little petition I’ve got going…

That’s right, a late Christmas present arrived yesterday in the shape of Arthur the Boar, and sows Mango and Liza. Looking to start breeding from them in 2013. They’re happily ensconced in their new woodland, and I’m pretty sure their previous owners Martyn and Greta are pretty happy that they’ve got some space to roam in their new home. They are a little on the chubby side (I’m not one to talk) so we’ve already formulated a slimming diet for them ready for breeding. It took us nearly an hour to feed them this morning as a couple of neighbours caught site of us carrying some huge 4ft bolted carrots up to them, and wanted to say hello too.

We hadn’t really planned on jumping in with some more Mangalitza quite so soon, but thanks to a series of happy events they’ve landed with us. I know it’s a little early to be talking bacon, but the reality is that these are for breeding and the ultimate result will be more piggies for meat. We’ve already had a little interest, so if anyone fancies a meat pig, some stock or some produce please let me know so that I can add you to the list and keep you up to date with what’s happening – we might be jumping the gun, but if all goes well the first male porkers will be ready Autumn/Winter 2013. 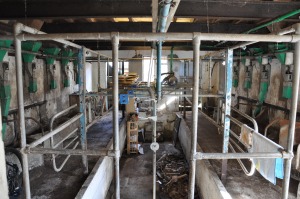 So, rather than look back, what will 2013 hopefully bring? Well, the main goal is to get our new processing space built – initial plans were for 2011, but they slipped to 2012 and now it’s 2013. This is definitely our year to get going properly. We’re pinning our last hopes on the processing and marketing grant from the Welsh Government at the moment, so that we can build a future-proofed facility that’ll see us through a fair few years. In one year alone we’ve outgrown our tiny processing space in the house, and are producing at capacity so we’re desperate to move on up. If the grant fails, it’ll be a case of rolling up the sleeves and asking as many supporters as possible to lend a hand. It won’t be ideal, and our plans of upscaling will take a lot longer, and everything (as we’ve done so far) will be bought second hand or begged, or borrowed. With the sun shining this morning, the windows and doors are open and a spring breeze is flowing through the house – pretty positive start I’d say.

We’re also looking to change a few things that we already do – we’re not quite looking to emulate the lean methodologies of Toyota but we need to change a few of our systems. Our Christmas profit has already been re-invested into another slicing machine, and hopefully we’ll be able to get a new scale/labeller sometime in the New Year.

It’s a new start for another business too. My long suffering partner Liesel has made the brave leap and is in the process of establishing her own Letterpress. What’s Letterpress? Well, in its most traditional form it’s the use of moveable type (either lead or wooden block), which are inked and printed onto paper. It’s the traditional way of printing the written word. We’re both printing fiends to be honest. I think it all started for me, when I bought my first Egg Press card from Kate’s Paperie in New York nearly ten years ago now.  We both signed up to a series of summer courses at Swansea Print Workshop and had a taster of copper etching, photo etching, cyanotypes, screen printing and some wood block printing. Bitten by the bug we found a load of bits and bobs on Freecycle including an old Adana letterpress, sadly it had been left in a hedge by its previous owner. This is where I stalled but Liesel carried on her letterpress quest, bought herself two more Adana’s and has regularly headed off to the bright lights of London to attend courses at Central Saint Martins and London Print Workshop. Last year while I was on my meat galavant across the Pacific Northwest, Liesel took her own personal tour of the letterpress studios, stores and workshops of the area including a visit for us both to the Portland based studio of Egg Press. 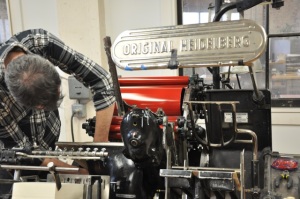 Our ‘Christmas break’ (and I use that in its loosest form) has seen us up-end our house once more. Friends, I know you’ve supported me over the past year, but please don’t expect to come and stay the night. We’ve turned the spare room into our own bedroom, and our former bedroom is now a fully functional studio with a nice space for a soon-to-be-purchased much larger press too. 2013 is pretty bloody exciting.